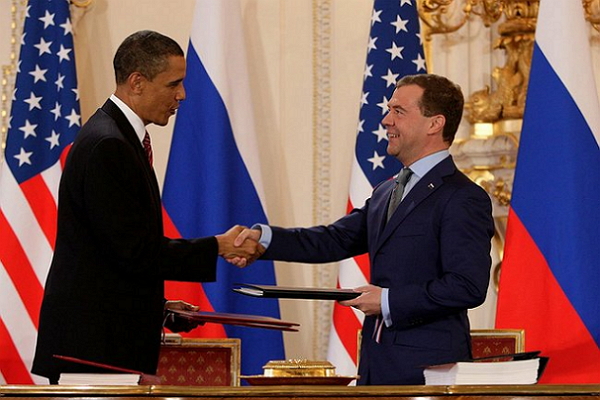 President Barack Obama assured Russian President Dimitri Medvedev Sunday that a vote in the U.S. Senate on the new START nuclear treaty should occur when Congress returns, calling it a “top priority” of his administration.

“I reiterated my commitment to getting the START treaty done during the lame-duck session,” Obama said. He made the assertion during an appearance with his Russian counterpart after they held talks Sunday morning on the sidelines of the Asian-Pacific Economic Cooperation forum in Yokohama, Japan.

The treaty is pending in the Senate, which is due to return next week for a postelection session. There has been resistance to the pact, principally from minority Republicans.

Obama declined to answer a question during a picture-taking session about whether his administration was putting more money on the table to maintain the U.S. nuclear stockpile in order to win GOP support for the pact.

Obama also said he believes Medvedev is reforming the political system in Russia and is moving the country forward. He said he supports Medvedev’s pursuit of membership in the World Trade Organization — a point the Russian leader reinforced as he and Obama appeared briefly before reporters and camera crews. He said he is “working closely” with Medvedev to gain Russia’s entry into the WTO.

Both Obama and Medvedev spoke of a close relationship they have and called each other friends and partners. Obama extended thanks to Moscow for cooperation on Afghanistan and on a host of international issues ranging from the Middle East to Sudan.

“We think that Russia has been an excellent partner,” Obama said.

Said Medvedev: “It has been very pleasant for me to have this meeting and discuss a whole range of bilateral and multilateral issues with my colleague. Indeed, we have a very good relationship. We understand each other very well. It’s very important to attain agreement on a whole range of issues.”

In Washington, a congressional aide briefed on White House plans for getting the START treaty ratified told The Associated Press that the administration was offering to add $4.1 billion in funding for the U.S. nuclear arsenal between 2012-2016. The aide, who spoke on condition of anonymity because he was not authorized to comment publicly, said the plan was outlined to Republican Sen. Jon Kyl of Arizona, who is seen as the key to winning enough votes to ratify the treaty.

The additional money would come on top of an additional $10 billion the administration had already agreed to over 10 years.

The administration is scrambling to get enough Republican support in the Senate to ratify the New START treaty before the Democrats’ majority shrinks by six in January. In a sign of the urgency of the administration’s pitch, government officials traveled to Kyl’s home state of Arizona to brief him on the proposal, the aide said. Officials also briefed Republican Sen. Bob Corker of Tennessee.

“This is a huge increase,” said Daryl Kimball, head of the private Arms Control Association. He noted that it is not certain that Congress will approve the funding, which will in any case have to be appropriated over time for each of the years in the proposal.