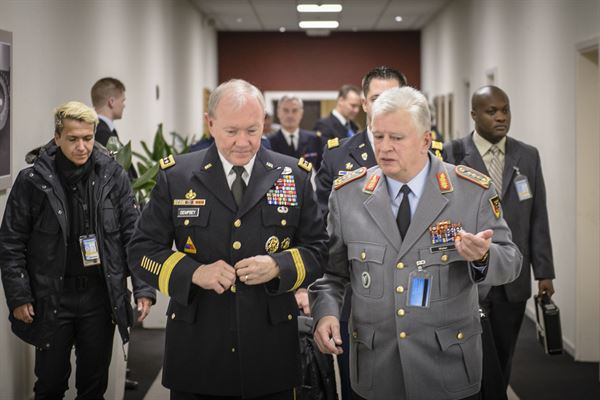 The US and Nato have drawn up plans to defend the Baltic nations against Russia, latest US diplomatic cables disclosed by Wikileaks show.

The cables, published in the Guardian, reveal plans to expand an existing strategy to defend Poland to include Estonia, Latvia and Lithuania.

Wikileaks is releasing hundreds of diplomatic cables, angering the US.

Meanwhile, a warrant for the arrest of Wikileaks founder Julian Assange has reached UK authorities.

Assange, who is believed to be in hiding somewhere in England, is preparing to talk to British police, his lawyer said.

Assange is wanted for questioning in Sweden in connection with rape allegations which he denies.

The latest leaked documents show that in January this year, US Secretary of State Hillary Clinton apparently signed a confidential cable saying allies in Nato had agreed to expand the contingency plan to defend Poland, to include the Baltic states.

The cables say the military plans should not be discussed publicly as it might lead to an unnecessary increase in Nato-Russia tensions.

BBC World Affairs correspondent Peter Biles says the documents should be seen against the background of Washington’s efforts to “reset” its relations with Russia and improve co-operation.

While the US and some of its Nato allies are eager to take on wider challenges and a more global role, a number of Nato’s central European members are more concerned about the potential threat from an old enemy – Russia.

The small Baltic states in particular have long argued to be included in Nato’s contingency planning to meet any resurgent Russian threat.

A cable from January confirms that “Eagle Guardian” – the code-name for plans for the reinforcement and defence of Poland – are to be expanded to encompass Estonia, Lithuania and Latvia.

But this and a related cable make it clear that Washington wanted no public discussion of this decision, largely it seems for fear of upsetting Moscow at a time when its support was needed on crucial diplomatic issues like Iran.

One secret cable from the US mission to Nato in Brussels revealed that US Admiral James Stavridis, the alliance’s top commander in Europe, had proposed in January expanding Nato’s contingency plans for defending Poland – known as Eagle Guardian – to include Lithuania, Latvia, and Estonia.

The cable adds: “The expansion was formally submitted to Allies for decision under a silence procedure.”

Another cable, signed by Clinton, instructs US embassies how to deal with the new Nato plan for the Baltic states, and stresses that the project must be kept secret.

“We see the expansion of Eagle Guardian as a step toward the possible expansion of Nato’s other existing country-specific contingency plans into regional plans,” it says.

Analysts say other cables show a degree of frustration between Warsaw and Washington over plans to deploy Patriot air defence missiles to Poland.

This had been the key price for a Polish decision to back the Bush administration’s wider missile defence plans.

But rather than getting operational systems with their full crews, the Poles received only launchers minus their missiles and a token number of US troops.

One senior Polish official is quoted in a cable from February 2009 as telling the Americans that his country expected to get operational missiles and not what he called “potted plants”.

Sources have told the BBC that the European Arrest Warrant for Assange arrived on Monday afternoon.

Assange’s UK lawyer, Mark Stephens, told the BBC: “We are in the process of making arrangements to meet with the police by consent in order to facilitate the taking of the question and answer that is needed.”

Sweden first issued an arrest warrant for Assange on 18 November but it was invalidated by a procedural error. A new warrant was issued on 2 December.

PostFinance, in a statement on its website, said Assange had “provided false information regarding his place of residence” during the account opening process.

“Assange entered Geneva as his domicile. Upon inspection, this information was found to be incorrect.

“Assange cannot provide proof of residence in Switzerland and thus does not meet the criteria for a customer relationship with PostFinance. For this reason, PostFinance is entitled to close his account.”

Wikileaks says it and Assange have lost 100,000 euros in assets in a week.

In one of its most controversial leaks so far, Wikileaks released on Monday a US State Department cable from February 2009 asking its officials around the world to update a list of key sites, the loss of which “could critically impact” the US.

The list includes undersea cables, key communications, ports, mineral resources and firms of strategic importance in countries all over the world.